“Once again, Megan Miranda has crafted the perfect summer thriller. The Last House Guest is twisty and tense, with a pace that made my heart rate. An edge-of-your-seat, up-all-night read.”

Pin this for later…

Synopsis of The Last House Guest by Megan Miranda

They say that opposites attract, or is it really more sinister than that?

When Avery Greer and Sadie Loman become best friends, their differences couldn’t be bigger. Avery, a local resident of Littleport, Maine with a dark past, and Sadie, the summer girl who vacations in Littleport every year who seemingly has it all.

But differences in social status don’t matter to Avery and Sadie, who have been best friends and spending summers together for nearly ten years.

Until Sadie is tragically found dead.

Her death is ruled a suicide, but Avery knows there must be more to what happened.

Determined to get to the bottom of it, Avery starts an investigation of her own. But what she finds may just blow up in her face.

When people start accusing Avery of having involvement in Sadie’s death, Avery is resolved to clear her name. But what she keeps uncovering is pulling her further into a hole she may never escape.

Any time a wealthy, attractive young woman dies, all eyes are either going to point to her blue collar boyfriend, or in this case, best friend.

The Last House Guest by Megan Miranda is the kind of novel that will keep you up at night second guessing ‘whodunit.’

It’s a quick read with compelling characters (you can’t help but just automatically love Avery and root for her every step of the way), and more than one person with a motive.

It’s also the perfect summer thriller. Preferably while sitting poolside with a margarita. But anywhere will do just fine.

I think my love of summer vacay spots began when I first watched Dirty Dancing. A place where two worlds collide: the locals, and the entitled wealthy guests who end up forming relationships with them.

Everyone has a story to tell, and we always find out that even when we feel we’re from different worlds, we’re really more alike than we could have anticipated.

Don’t be confused by my three star rating: I enjoyed this book. The plot line kept me guessing, the ending was satisfying, and the read was quick. Did I think about it for days after? No. But I still liked it. 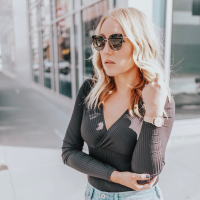 People We Meet On Vacation by Emily Henry | Book Review

How Lucky by Will Leitch | Book Review

These 3 Thrillers By Alice Feeney Will Keep You Guessing